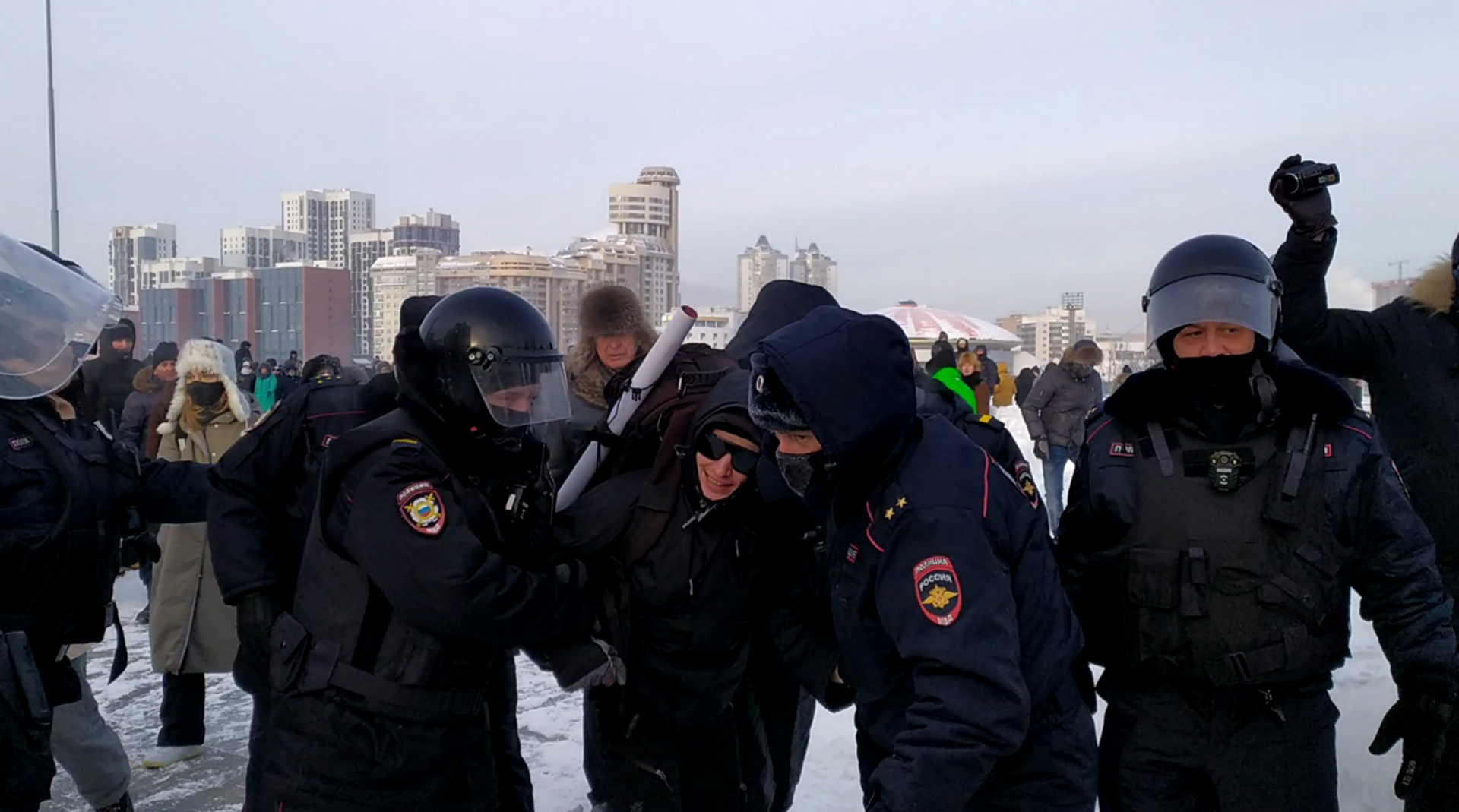 As demonstrations swept the country last weekend, Tima Radya as well as Masha Alekhina, Victoria Narakhsa, and Lucy Shteyn were held by police
Among the 3,893 people detained across Russia during the protests on 23 January against President Vladimir Putin and in support of the jailed opposition leader Aleksei Navalny were three members of Pussy Riot and Tima Radya, a street artist from Yekaterinburg who has been called the Russian Banksy. Numerous other artists participated in the protests and stated their support on social media.

The protests highlighted a new level of anger and geographical and social sweep following the arrest of Navalny when he returned to Russia on 17 January following months of medical treatment in Germany after he was poisoned by the Soviet nerve agent Novichok in Siberia last summer.

In a double blow to Putin’s image, on 19 January Navalny’s team released his film “A Palace for Putin”, about a $1 billion complex allegedly built for the Russian leader near Gelendzhik on the Black Sea, with amenities including an $850 toilet brush, a casino, theater, hookah room, and underground ice rink. The documentary has attracted over 90 million views on YouTube, which prompted Russian contemporary art impresario Marat Guelman, who is living in self-imposed exile in Montenegro, to say it should be nominated for an Oscar. A room referred to by Navalny as an “aqua disco” has been transformed into a viral meme set to an electro beat by the comedian Andrei Gudkov and video artist Andrei Ceausescu.

Pussy Riot members Masha Alekhina, Viktoria Naraxsa, and Lucy Shteyn were detained by police in Moscow on 23 January. Narakhsa and Shteyn were sentenced to ten days in jail and Alekhina was fined 30,000 rubles ($400). Before the demonstration Nadya Tolokonnikova had posted a video with practical advice on how to behave if detained.

On 22 January, a day before Saturday’s demonstration in Yekaterinburg, one of Russia’s centres of artistic and civic protest, the street artist Tima Radya, a former philosophy student, revealed his latest graffiti, a sign on a fence, “What will we do tomorrow if there is no one to believe in today.” He posted a short treatise posted in social media that read in part: “We are building the future as best we can. But why build a beautiful house when a Gulag is growing around you? I can’t not think about this, I can’t remain on the sidelines. There are many incarnations of freedom, and the street is one of the main ones, I know this for certain. Go out on the streets tomorrow, do not be afraid of anything.”

Radya, who in a dramatic installation last year had sent the word 'future' up in flames, went to the Yekaterinburg protest with a sign reading “Peace to Shanties War to Palaces” and was detained. After he was released, he wrote on his Telegram channel that the police major told him “I would hug you, but you are simply text.”
read in source Back to all media
Back to all media